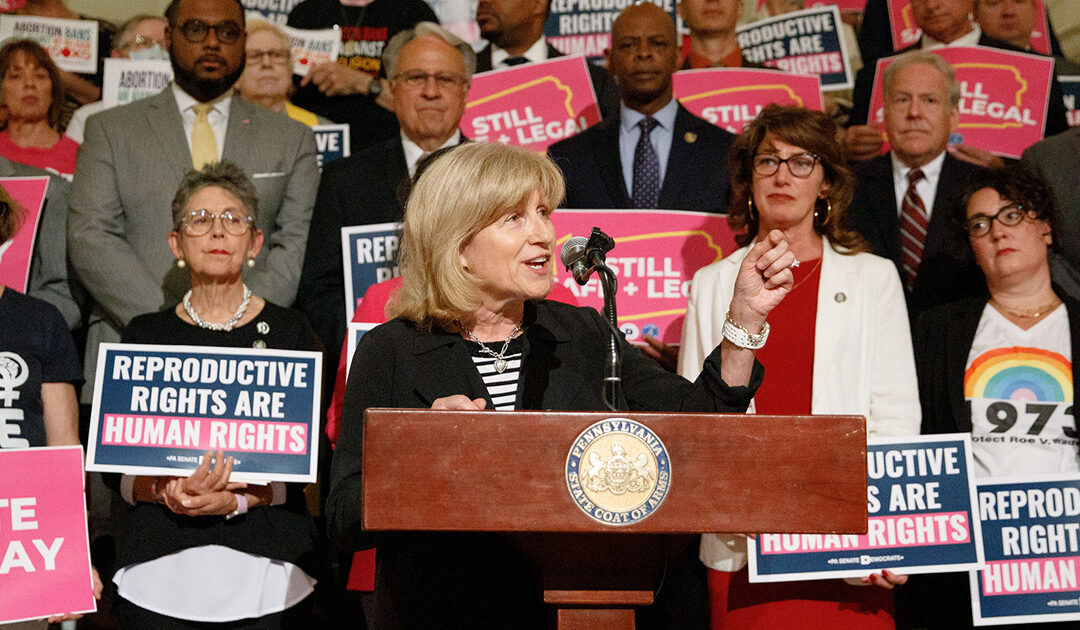 Harrisburg — June 27, 2022 — Today, the four co-chairs of the Pennsylvania Women’s Health Caucus were joined by senate and house Democratic Leaders Sen. Jay Costa and Rep. Joanna McClinton to talk about the reversal of Roe v. Wade and the need to preserve abortion access.

The group of lawmakers vowed to protect the access to abortion Pennsylvanians currently have and warned that efforts to restrict abortion in the commonwealth will only intensify after last Friday’s decision.

“Safe and legal abortion is still the law in the Commonwealth of Pennsylvania,” said WHC co-chair Rep. Morgan Cephas. “The place where American democracy was forged is still a place where a uterus does not make a person a second-class citizen. For now. While we stand here there are closed-door meetings going on all over this building. In those meetings, the right-wing extremists who turned the United States Supreme Court from an impartial body into the most partisan and authoritarian force in the nation are giving their marching orders to the men – and, sadly, women – who control the legislature.”

“I am committed to protecting access to abortion in Pennsylvania, along with every other facet of reproductive health care,” said WHC co-chair Amanda Cappelletti. “We need to be expanding access to healthcare, not stripping it away. However, being in the minority means that pro-choice legislators can’t fight back against these threats alone. Senate Bill 956 is a dangerous constitutional amendment that the Governor will not be able to veto. We need Pennsylvanians to pay attention as this proposal to deny a person’s access to abortion moves through the legislature.”

“While we stand together to speak for the majority of people, we have to remember the Republicans control the house as they’ve done for 23 of the last 27 years,” said WHC co-chair Mary Jo Daley. “Republicans also control the Senate like they’ve done unbroken since 1994. They can bring up and pass an abortion bill or amendment any time they want. We know abortion is still safe and legal in Pennsylvania. But our fight is not over. It’s time to look to the brave people of the past that fought together for their rights and work together so that future generations regain the full right to make their own decisions about their bodies.”

“Roe has protected my ability to make decisions about my own body for my entire adult life,” said WHC co-chair Sen. Judy Schwank (D-11th). “I can’t tell you how difficult it is for me to think that my granddaughters will grow up in a country that affords them fewer rights than it did their grandmother. That’s the very definition of going backward.”

“With this one decision, American life was so fundamentally altered in a way I have not seen at any other point in my career as a public servant – probably in my entire lifetime,” said Costa. “We stand firm in our commitment to do everything we can to preserve and maintain legal and safe access to abortion in Pennsylvania as it stands today. What we have to do is take that dark nightmare of Friday’s decision and do everything we can to secure this right. We have to turn this frustration into advocacy.”